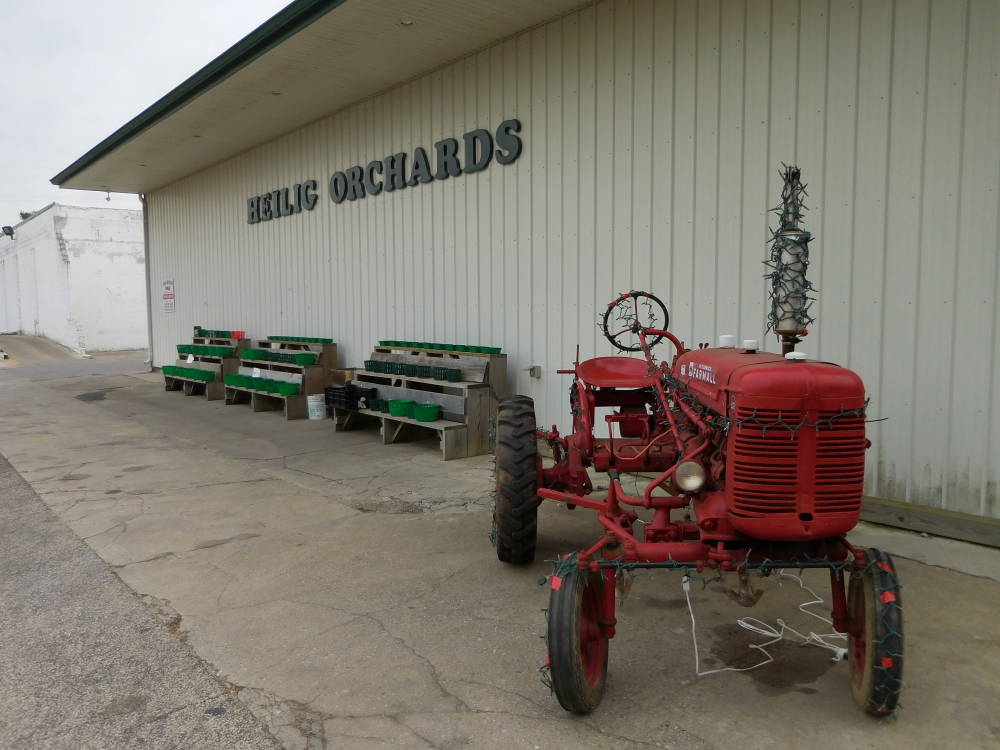 Heilig Orchards is located in beautiful and historic Mullica Hill, New Jersey. Mullica Hill rests along the banks of Raccoon Creek and was settled in the late 17th century by English and Irish Quakers who originally named the settlement, Spicerville. At the time, only the north shore of the creek was known as Mullica Hill. Until a growth period lasting till the 1830’s saw a substantial amount of new construction on the shore. Soon the entire village would be renamed Mullica Hill and in 1991 was placed on the National Register of Historic Places.

The 225 acre orchard consisting of Yellow & White Flesh Peach trees, as well as Nectarine and Apple trees, is spread across the fertile farmlands of Gloucester County.

I met Carl Heilig Jr., fourth generation owner of Heilig Orchards, on a rather mild January afternoon in the farm’s office, which doubles as a “trophy room” of fables linked to the taxidermy remains of beautiful elk and deer. Carl Jr. is a great person to be around, he is always laughing or smiling and has the work ethic to run an orchard of that size and consistently produce the high-quality stone fruit the Jersey Fruit Cooperative is known for.

In the off season, the refrigerated coolers on the farm, which are normally filled with freshly hand-picked stone-fruit, are taken over by pallets of obscure produce from around the world. Storing imported produce is a great way for farmers to make a couple extra dollars in the winter months when their coolers aren’t in use. On this day in particular, Carl was moving the last pallets of watermelons onto a truck bound for a grocery store in the mid-west. Since Carl was preoccupied, he directed me to a field of peach trees a few hundred yards away where the trimming process was already underway. 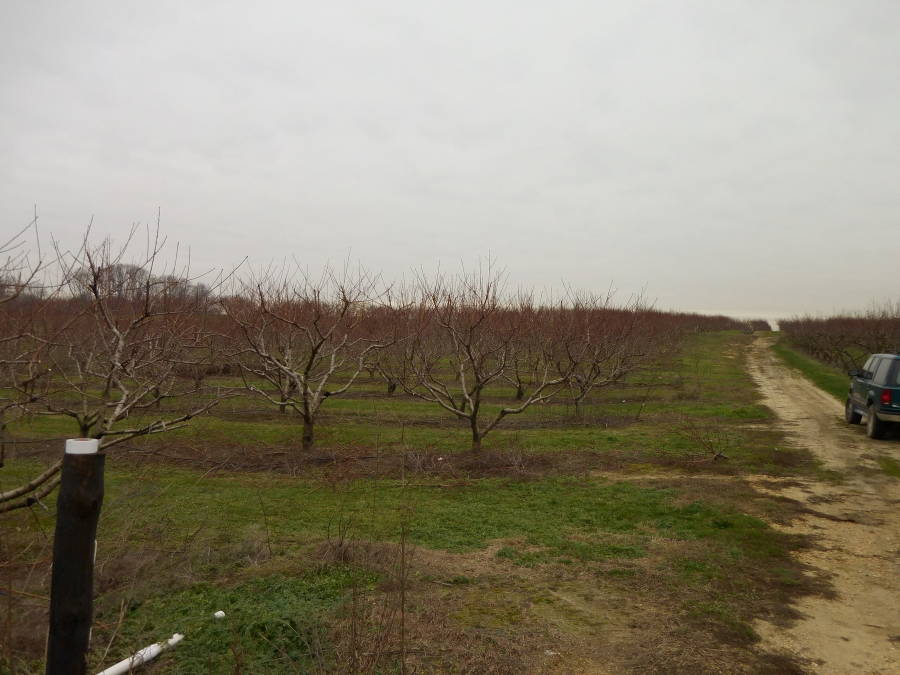 Next to packing house; stone-fruit trees, as far as the eye could see

The short walk over to the field had me filled with emotions; mostly excitement mixed with curiosity, because in a few moments I would finally be using a piece of equipment I heard about a few months back.

You see, this farm update actually begins back in November when the Jersey Fruit Cooperative held their End of Season Dinner. At that dinner, I presented to the cooperative members my intentions of working in their fields during any and all operations they felt were important to their crop. I explained how my efforts are aimed to bring our Farmhouse Fruit customers closer to the farms we service by rolling up my sleeves, getting my hands dirty, and playfully narrating my experience.

Carl Jr. pulled me aside that night to mention he would begin trimming his peach trees in early January using an “air cannon” and I should come visit. I stopped listening the moment he said “air cannon” and knew that job was for me.

For the past two months, I dreamed what an “air cannon” used for trimming trees would look like. Fantasies of me in the orchard; riding in the bed of a truck, wielding a high powered cannon that shot burst of compressed air, had occupied my daydreams for longer than I would like to admit. 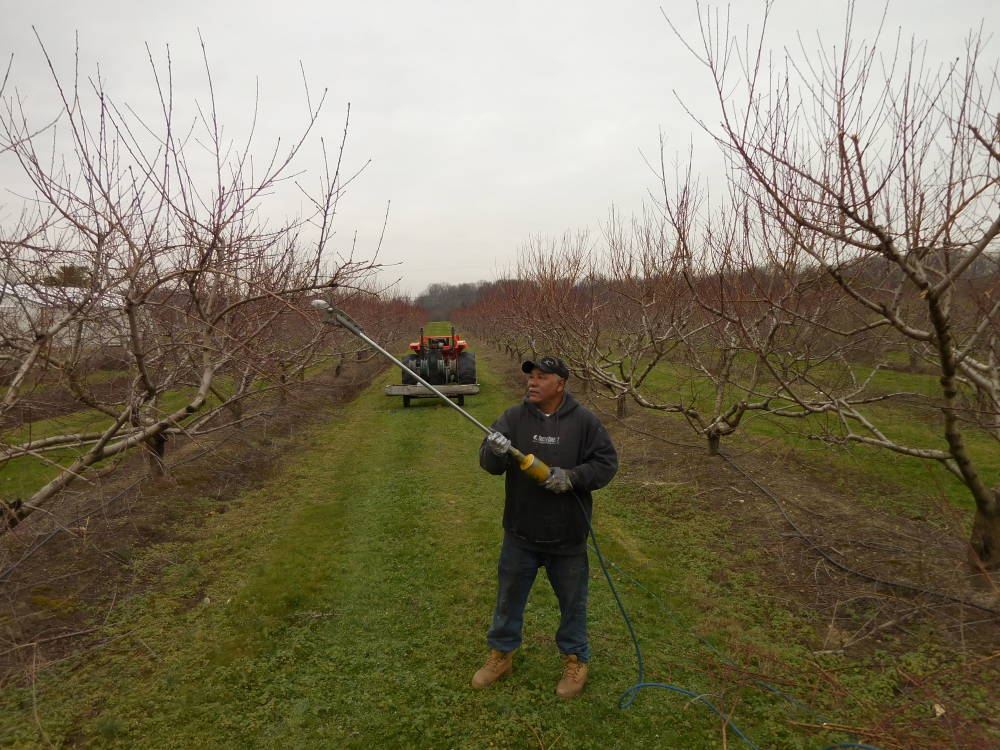 As I walked into the orchard and met Francisco, I could hear the aggressive hissing sounds bellowing from the machine I hoped to tame. Through my rusty, 5th grade level Spanish conversation skills, I introduced myself to Francisco and learned he has worked with the Heilig family for 45 years. He didn’t look over 50 years old; maybe it was my bad Spanish linked to a miscommunication or possibly all the peaches he has eaten over the years made him age gracefully.

Either way, Francisco looked puzzled when I explained how excited I was to finally use the “cannon” and learn how to properly trim the trees. My excitement was trimmed quicker than a peach tree, when I saw what the “air cannon” was really all about. 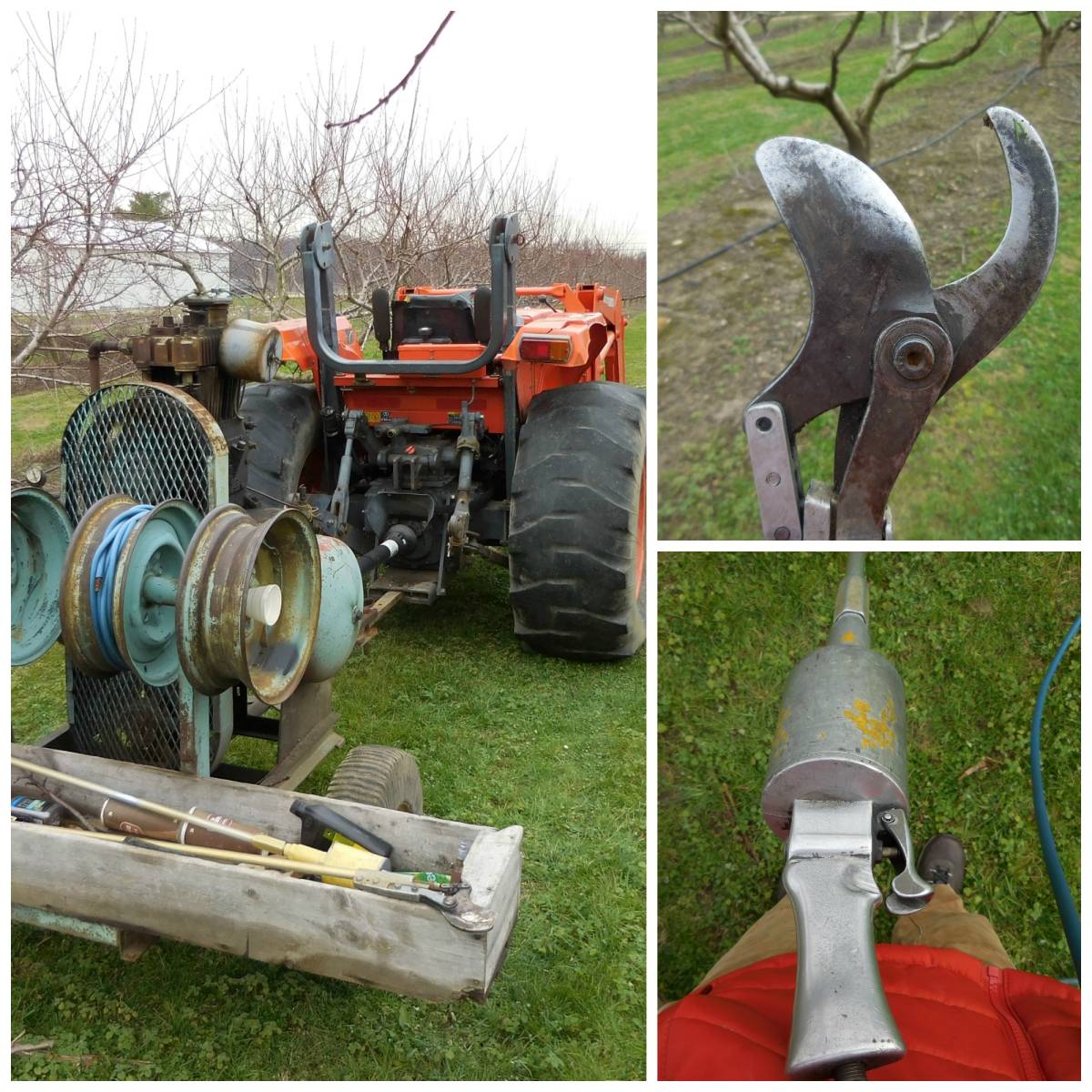 Cannon? Not so much

Some “air” but very little “cannon.”

Admittedly, the “air cannon” wasn’t everything I dreamt about but it sure made trimming the hearty peach trees easier than the traditional method of hand sheers and muscle. All 225 acres of stone-fruit trees need to be trimmed by hand which takes the crew between 3 and 4 months. Unfavorable weather is the biggest obstacle to a tree trimming operation; cold weather causes the air compressor to constantly freeze up while wet weather slows the manual trimming process. Neither of these conditions were present on the afternoon I helped trim, for all intents and purposes the day’s forecast was perfect, so I was surprised how lengthy and involved the process was.

Trimming peach trees is a daunting task due to the sheer number of trees but it is also extremely important in order to grow the largest and healthiest fruit possible. Francisco explained to me his main goals of trimming are to remove over-growth around the center of tree, clear overhanging branches in the rows, and control the height of the tree. Skilled trimmers open the middle of the tree to allow the leaves and fruit to dry out faster, fighting mold and disease growth. Unfavorable conditions for mold and disease means our farmers can use less chemical applications. Removing overhanging branches ensures no buds or fruit are damaged when farm equipment is driven down the rows. The height of the peach tree is also very important to keep an eye on. All of our peaches and nectarines are hand-picked by workers utilizing a 3-legged, 8 foot ladder and anything over roughly 10 feet may be just out of reach.

Looking at the before/after picture below, you can see how much overgrowth is removed from the tree. This gives the healthy shoots more room and resources to grow the full size, juicy peaches Farmhouse Fruit is known for. The trimmed branches are left on the ground in the rows, to be raked up and collected at a later date. 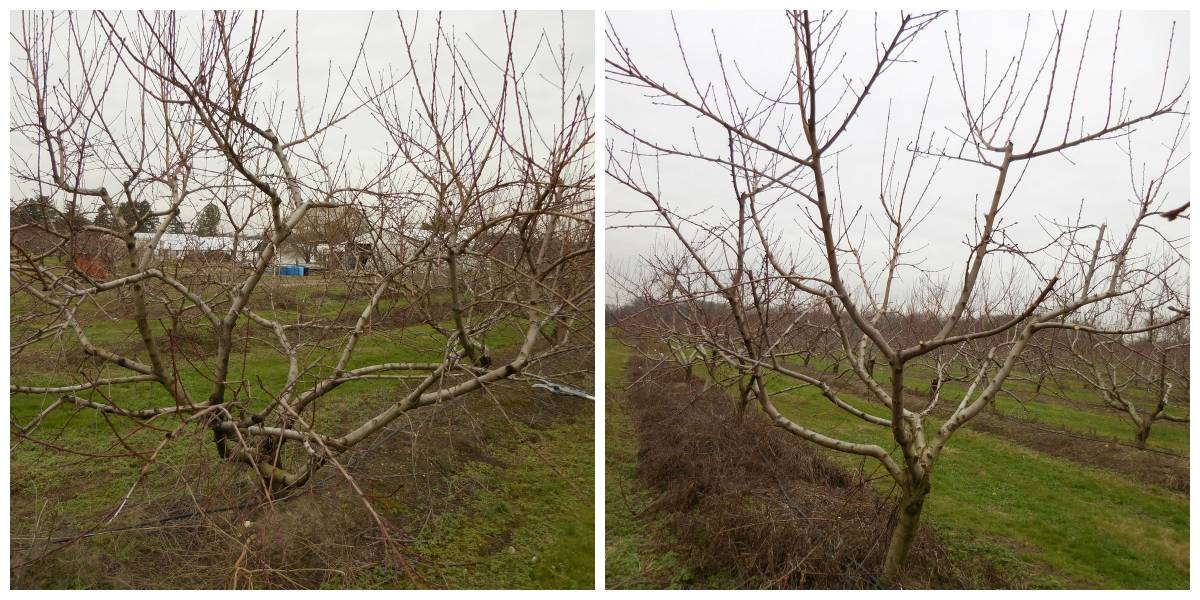 Before and After trimming. More room to breathe.

Carl Jr. finished loading the watermelon and was soon in the field to oversee the trimming process. After I took the opportunity to fill him in on my disappointment surrounding the “air cannon,” he showed me something interesting on the mostly bare trees, which he called “mummy fruit.” This happens when fruit is not harvested during the season and spends the fall months decomposing, still attached to the tree. The once plump peach turns into something you would find under the seat of your car when a peach goes missing from your grocery bag a year earlier. Mummy Fruit can harbor insects or bacteria that can be detrimental to the health of the tree if the decayed fruit isn’t removed. 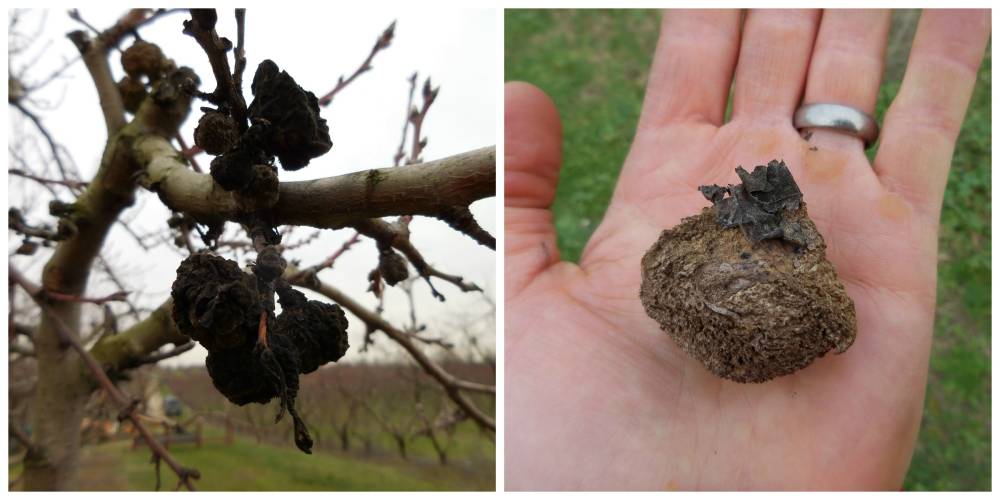 The photo below shows a newly planted and trimmed two year old peach tree. Can you pick out the two Sustainable Agriculture procedures in place in the picture? 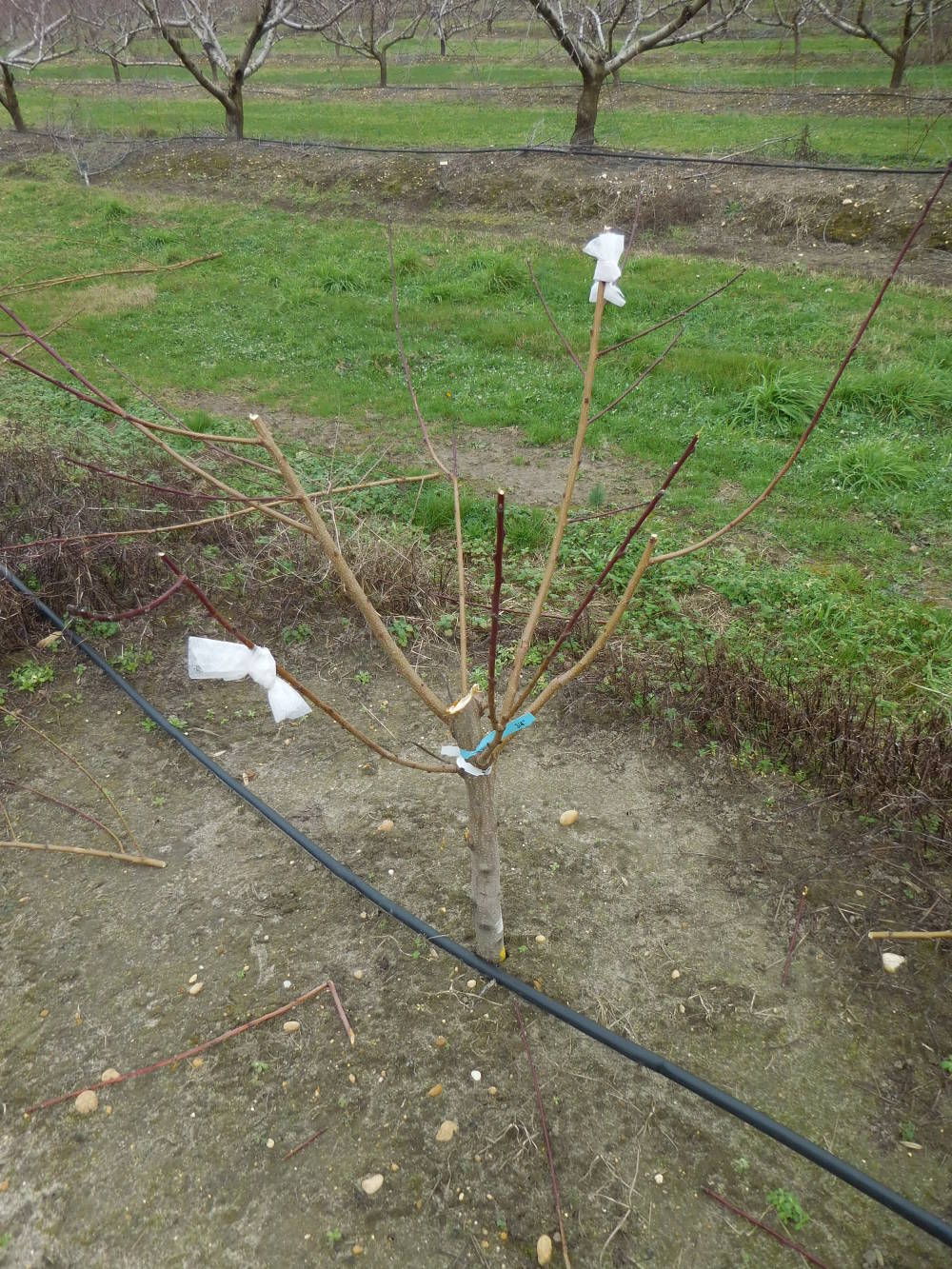 I found the secret to the fresh smelling air in the orchard!

Do you see that black tube running along the ground at the base of the trees? Those are drip irrigation lines, which cover all 225 acres of Heilig Orchards and conserves more water than traditional overhead sprinkler methods. By providing water directly to the base of the tree a farmer can also reduce the excess moisture introduced into the canopy to decrease the likelihood of disease.

Can you spot the second Sustainable Agriculture process? See those white pieces of fabric? If you guessed those pieces of fabric tied to the tree are Bounce Fabric Softeners, you would be correct. If you also guessed those dryer sheets are to make the orchard smell better for the workers, you would be wrong and silly for thinking that. The fabric sheets are a safer alternative to deter the local deer population from destroying the young trees. Male deer are know to rut against the small trees to remove the velvet from their antlers and some deer have come to find the taste of young peach trees delectable.

Peach trees begin producing a full crop (typically 66 lbs. per tree) 3-4 years after planting and normally decline in production after year 12. Ever year Heilig Orchards must replace hundreds of old trees to make room for newer varieties that will strengthen & lengthen their season to compete with other peach producing regions in our country.

If you live in the Northeastern United States, you have witnessed a non-typical fall and winter up to this point. Peach trees require enough “chill hours,” when temperatures fall between 32 and 45 degrees, to break dormancy and flower. If our trees do not receive the minimum chilling hours it could delay initial leaf development, which could disrupt the entire season. Our growers have been doing everything in their power to prepare for a great season, all they need now is a little cooperation from Mother Nature.