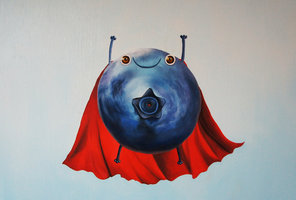 Blueberries are native to North America and botanists believe they have been part of the North American diet for some 13,000 years.

When our European ancestors first made contact with Native Americans, they were already using blueberries all year-round, in many different ways. Native Americans were using sun-dried blueberries, which they referred to as “star berries” due to the blossom end of the berry forming a five-pointed star, in stews, soups and even as a meat preservative. Historians believe Native Americans gave blueberries to the first settlers, which helped many of the pilgrims survive the first harsh winter.

The little blue super-fruit has quite a history and can be directly linked to Elizabeth “Lizzie” White, the daughter of a New Jersey farmer, and Dr. Frederick Coville, a USDA botanist, who worked together in the early 1900’s to prove blueberry bushes could be domesticated and cultivated.

As time passes, more research is being conducted into the health benefits of blueberries and it is no surprise why our ancestors incorporated blueberries into their diets in so many different ways.

Most fruits and vegetables with a deep red, purple or blue hue (like blueberries) contain a flavonoid know as anthocyanins. The bright and bold color of anthocyanins in fruits are thought to attract animals which may eat the fruit and disperse the seeds while also protecting the plant from environmental hazards such as ultraviolet light, drought and cold temperatures.

Anthocyanins are still being heavily studied for their apparent role in the reduction of cardiovascular disease, improving diminishing cognitive ability and fighting cancer. While studies are still being conducted as to how these anthocyanins prevent disease on a biological level, it is widely known that increasing the consumption of plant based foods can decrease your risk of heart disease, diabetes and obesity.

*Health benefits of increasing the amount of foods containing anthocyanins in your diet: